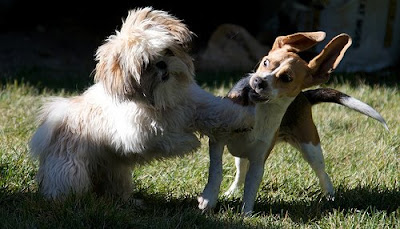 So, we found that adding a second beagle created an exponential increase in the beagleness factor of both dogs. By dogs I mean hellspawn. Around every corner was a 12 inch dog who would leap three times that high to snatch any food item on your person and then flee, only to be engaged in battle by it's nemesis/best friend for the next several hours. The goal of each battle was not victory exactly, but to climb upon and leap from every piece of furniture in sight while biting onto the opponents ears. Triela has memorized and mastered ascent routes onto the couches, counter tops, and tables, and is currently working on hiding in the ceiling fan. Sadie had stopped actually touching the ground as she gave chase and instead hovered while bouncing off walls, furniture, and Avyrlie in order to complete physics defying maneuvers.

By the end of each epic battle (measured in days...) the dogs would simultaneously fall into unconsciousness next to whatever human was closet to them, usually Ian or Avyrlie laying on my bed. Both dogs were just as intensely lazy as they were active. Once they had filled the destruction quota for the day, they had no interest in anything going on around. Alert dogs? Not hardly. 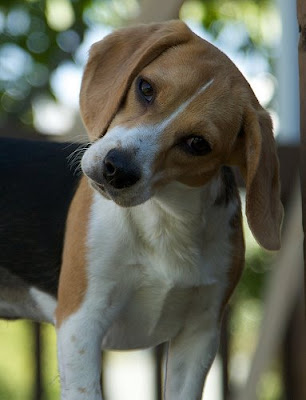 In the end we decided to find Sadie a new home and find a better fit for Aimee's dog expectations (freaky looking, useless, yappy, poof of fur that darts underfoot). We found a stay-at-home mom with several kids who loves the outdoors and wanted a walking companion. Sadie (without the presence of another beagle) loves people and is very friendly and social. We were all a bit sad to see her go, but glad to have found her a good home. DefCon beagle was lowered to a reasonable level once again.

For several weeks I frequented the pound and browsed online listings without much luck. We decided that the perfect dog would be under $300, alert, housebroken, female, playful, and bring home at least $80,000 before taxes.

Finally, this last Monday, I found a listing on KSL for a 7 month old, housebroken, female Shih Tzu for $300. Five out of six... A quick email to Aimee received a 'Yes, yes, yes" reply so I began calling and leaving messages that we were interested despite the dogs lack of earning potential. I'll admit to being a bit of a pest because I called every 10 minutes alternating between the home and cell phone numbers listed on the ad. Two weeks of dog hunting had made me a bit desperate. 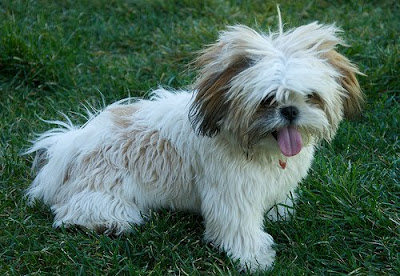 I finally got a call back so Avyrlie and I headed out to meet the mutt. She had been with the family about a month, and mom had just found out she was pregnant with a surprise fifth kid (who is apparently replacing the dog. Poor kid ;) 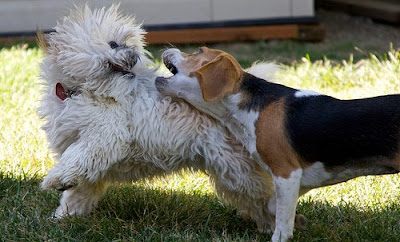 The bipartisan naming process in Smith house has been greatly improved over the years, but still creates some heated debates and frequently involves moves still banned from most cage fighting leagues. In this case my arsenal contained the fact that Aimee has just encouraged the purchase of a dog with CHINESE ORIGINS!!! Oh the naming possibilities! As with Triela, the name Aimee will call her and the actual name are slightly different, but I needed a quick compromise to escape the double arm bar before the damage was permanent, and thinking is tough with your face mashed between the floor and the kneecap of your significant other.