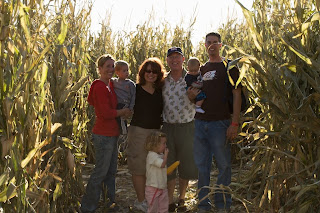 While Aimee and I took the broken boy to the ER, mom and dad offered to watch Avyrlie. Really they were just looking for an excuse to do some playing ;) and play they did. When I finally dropped Ian and Aimee off at home, I found mom and dad at Thanksgiving Point with Jessica and Greg as well. It took me an additional 45 minutes to get through the insane line and join up with them, but it was well worth it.


The kids were having a great time, and there is a ton of stuff to keep them entertained. Avyrlie loved the princess dress-up and carraige as well as the 'princess castle bounce house'. Label anything 'Princess' and she's there! Dylan had a great time in the bounce house as well, but both kids started getting restless during the storytime so we headed to the next activity.

Avyrlie and Dylan spent the next 20 minutes picking up kernels of corn and throwing them at each other and any other unsuspecting victim who ventured into corn-kernel throwing range. They were finally lured away with the promise of playing on the diggers. This turned out to be a little disappointing as kids were a little to small to handle the heavy machinery ;)

Then off to the corn maze! Dylan and Avyrlie both had to take a bite of an ear of corn. Even Jessica gave it a taste and found it just as unpleasant you might imagine old, dried, corn kernels to be :o The kid maze turned out to be just the right size for the kids with enough turns to momentarily escape, but not complex enough to got very lost. We tried it a second time with an egg hunt, which turned out to be very confusing, unorganized, and chaotic for the adults, but the kids were happy to do anything involving free candy :)

A couple obligatory 'face on the farm animal' and 'huge rocking chair' pictures later, and we were done enjoying the dusty, hay-filled playland, and ready to head for home.