Dude, that show is intense!

Aimee and I have found that our favorite way to watch TV is waiting until about the 5th season, and then watching previous episodes on DVD. Recently we started watching 24 and while Aimee has been a little put off by the shock value thrown in by the producers, I've enjoyed it quite a bit.

Last night we had a lazy family night going out to 'Sweet Tomatoes', playing Wii, watching Avyrlie do stunts off the couch, and then eating snacks and watching 24. Aimee lasted about 30 minutes (all of which she spent glued to Facebook and Chelsi's Twitter feed) but Ian and I stayed up to watch all four episodes on the last disc of Season 1.

It's pretty rare that he gets into a TV show and he was very into this one. For those of you who haven't seen the end of Season 1 (yeah, it was probably just me) stop reading here.

Disclaimer: the 'dude' thing comes from Aimee. Obviously it was a popular expression in the 80's.

Breakfast of Champions. errr, me 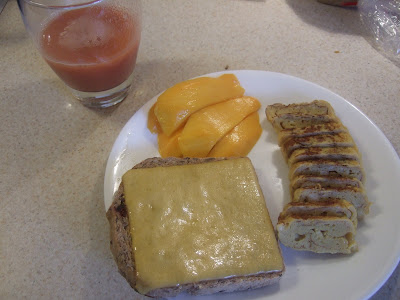 Egg sandwiches have been one of my favorite breakfast items for many moons now. More recently, I improved slightly on my recipe (if you can call it that). Not as quick, but well worth the slight time investment (click below to read on if you have nothing better to do ;)

Ian's favorite healthy snack, and mine because I don't have to blackmail him to eat it, are mangos. Of course, in true Ian style, his favorites are the more expensive Atualfos, which are quite a bit better, and they don't seem to go bad as quickly as others. Anyhow, that's on the top of my plate. 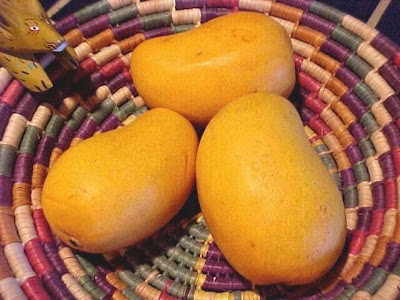 My juice of choice is Odwalla Strawberry 'C' Monster. Super stuff and Costco started carrying it making it much cheaper! I really hate pills and vitamins, but am a firm believer in Vitamin C. Yes, brainwashed as a child ;)

Now for the actual recipe improvement. When I'm in a hurry, I just toss the eggs in a pan, scramble them as they cook and toast some bread with cheese. Stick the two together and head out the door. Given a bit more time though, I pull out the Tamagoyaki pan and make up a Japanese style omelet.

You can find the actual technique on YouTube, but essentially you are cooking a thin layer of egg, rolling it, and then setting the roll on top of another thin layer to repeat the process. 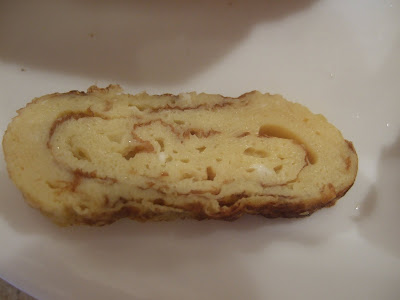 Slice up the roll of egg, lay it out on the bread, and enjoy!!! 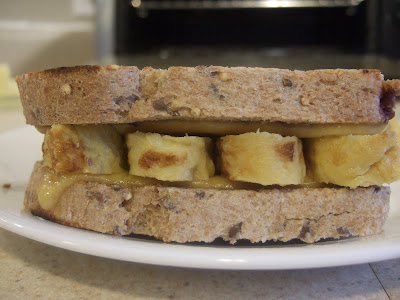 The Stuff Birthdays Are Made of: Pot Shopping, Sushi, and Fairies

As birthdays go, this year was pretty good. I tend to slip into a hermit mood this time of year and ignore most of the world so I hadn't seen much of anyone for a bit. The last family interaction I had was Chelsi taking me to a chick flick (didn't improve my mood) and then ditching me for the opening of Watchmen (I hope the guilt sears her soul ;)

My mood was much improved with the whole birthday event though. I'm pretty apathetic about it generally, but I do like getting together with everyone. We missed Jarom's family, but had everyone else (not counting the all-male-plus-mom Iowa compound) out to eat mexican at a newer place called Geckos. The food was good, service was quick, and the kids were entertaining. My favorite part of the night was having Avyrlie open my card from my family, taking out the money, and announcing that she was giving it to grandpa. I'm not sure what kind of obedience training goes on when she spend the night down there but apparently they didn't teach me all the tricks! 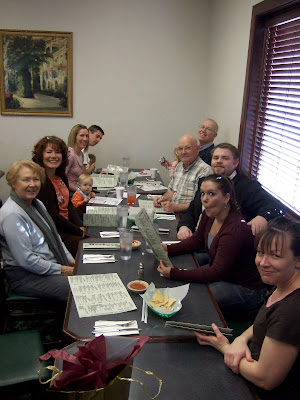 I put the birthday money to use, after recovering it from my dad, and finally picked up a enameled dutch oven that I've been wanting for a while now. It's fantastic too cook with, is just the right size for soups, chili, curry and the like, and gives Aimee the casserole dish she's said she wanted. My money says she doesn't cook anything in it for at least 3 years ^_^ 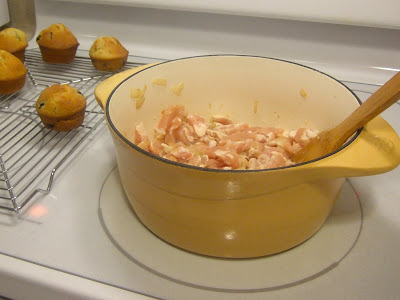 We also went out for sushi on the actual celebrated day. Ian likes menu items with large price tags and Aimee likes 10 items with small price tags so we don't do sushi too often. We ended up with some fantastic rolls, seafood pasta for Ian, and teri-yuki chicken for Avyrlie. It was a great meal and we all left stuffed. 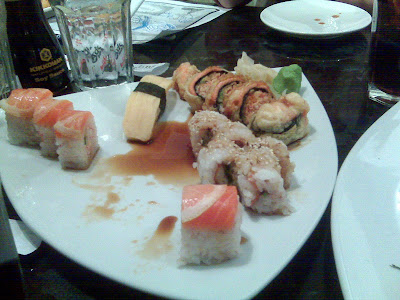 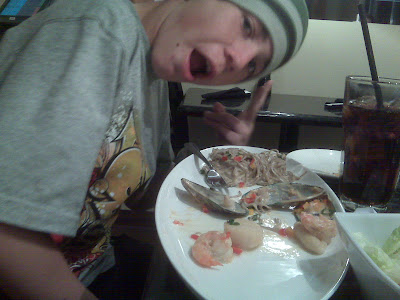 Last but not least, we had no junk-mail on Monday. In fact we only had one piece of mail and it was a birthday card from my in-laws in Australia. The card has a great shot of the Fairy Penguins that everyone keeps trying to get pictures of. Aimee's shot was pretty good, but doesn't quite do them justice:

Great timing and a great card!

Thanks to everyone for all the birthday wishes.

Ian had a 50's themed dance at school last week. He was pretty excited about it and probably had a better time than is reflected by the photo. A friend of mine did the pictures for the dance and sent me this one titled "Teenage Angst" and said this was all the smile she could manage to get out of him.

Below is his dance card. It was pretty neat that they had practice dances and did the card to get ready. I remember my first dance and it was not anywhere this organized. Ian is much more social than I was at the same age as well. 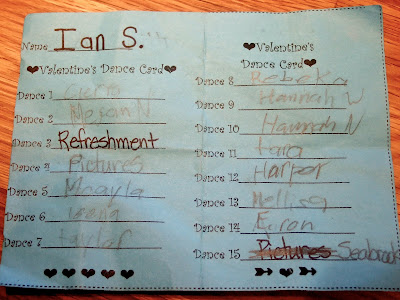 Posted by Aaron Smith at 9:28 PM No comments:

The fact that I can wake up at two in the morning and watch people being punched in that face while making a late night omelet is why I love the internet.


Slow Motion Punches to The Face from Eduardo Wydler on Vimeo.
Posted by Aaron Smith at 4:37 PM 2 comments:

We celebrated Joshua and Hayden's birthdays on sunday at the Richardsons. Josh did meat and coleslaw for some fantastic sandwiches and Costco made us a cake ;) Rachel had put together a video of their Disney trip and Kim brought the latest SceneIt game for the xBox. This one was pretty cool. I apparently either need the anime version or just need to watch more movies with Aimee 'cause we got smoked by everyone.
Ray made it up for a while, but the rest of his crew got sidetracked further down the hill (Cabellas...).
Posted by Aaron Smith at 8:44 PM No comments:

I apparently need to be a bit more specific when I ask Dylan to help me 'take care of' his little brother ;)

Ian scored well enough at District to be invited to the Regional competition at BYU. He's pretty excited about the whole thing. I think he is most concerned about impressing his teacher. There were four kids from his school that were invited to Region so they were all pretty excited.

Afterward we went out for sushi at a newer place in the District called Blue Fish. Other than the tempura, it was really good. I struggle to pay $15 for a bowl of soup for Ian, but he loves it and it was really good. Aimee and I have agreed (yes, miraculous!) that the caterpillar rolls are our overall favorites anywhere. They also had a roll with crab, jalapeno, and cream cheese. I forget the name, but they were very good.

Avyrlie was having a ball when we arrived to pick her up from play night at Little Gym. They had pizza and played games and were (very actively) winding down when we showed up at 9:50. Not at all what we had planned, but a great date/family night anyhow :) 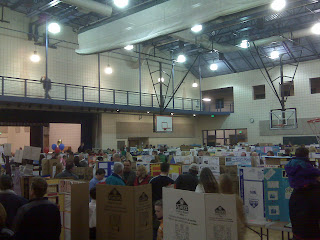 So, we signed Avyrlie up for a 'Night Out' class at Little Gym tonight from 6 to 10 and we're planning on a date night. Instead, we are now sitting in the Daybreak Elementary cafeteria waiting for the winners of the District Science Fair to be announced.

Ian is pretty excited and really felt good about his interview so it makes it worth it. Anytime he is excited about school it's a prettty cool thing.

They are just now starting the announcements (an hour late...). More later :)

Posted by Aaron Smith at 7:38 PM No comments:

Yes, around here rice deserves three exclamation points. For Ian and I, we could eat rice for all three meals and the occasional snack. Aimee will eat it so long as it is submerged in a sauce and nothing sends Avyrlie into crisis-alarm-panic mode faster than finding a grain of rice anywhere on her dinner plate.

Recently, we converted Aimee to the joys of rice pudding. It didn't take a whole lot of converting, she just had to taste MY rice pudding! She's slowly coming around on sushi as well. Also, my dad had asked me about making sushi rice so while I have a couple minutes this morning I thought I'd jot down two of my favorite, simple rice recipes.

There are recipes I like more, but they are pretty time intensive and in my world, if it's not pretty simple, I'm just not going to take the time.

Put it all in a pot for about 20 minutes, or until all the liquid is absorbed by the rice.

Just as simple to make is sushi. Yes, the rice does matter. You need a japanese style short grain white rice. I've had good luck with Kokuho, and Tamaki Gold. You also need a rice cooker. Well, you don't actually need one, but if you ever use one you won't go back. I tried several different cookers and finally found one I love! 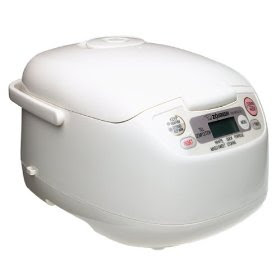 I can start the rice anytime that day and have it ready, waiting, and perfect when we're ready to eat. There are cheaper cookers that work well, they are just not quite as foolproof, and I NEED foolproof ;)

After you've cooked your rice, mix together in a saucepan on low:

Make sure the sugar is dissolved, then cool to room temp. Mix this with 4 cups of rice being careful not so smash to rice too much and voila!

My favorite simple roll (that Aimee will eat ;) is kamaboko (crab), cucumber, avocado and cream cheese.

Posted by Aaron Smith at 8:38 AM No comments:

Holy Cow! I made District!

Ian was pretty excited today that his science project was picked to go the the district fair. He did a lot of work on it and knew what it was all about. I think he enjoyed doing it overall even if it took more than a little badgering to keep him on task. One more school victory!
Posted by Aaron Smith at 8:14 PM No comments: