We're talking about Easter of course!

(click on any pic for the rest of the gallery)

We spent Sunday destroying dinner rolls, hunting eggs, jumping on the trampoline, and playing ferocious football with the Hasaras.

Saturday we hung out with the Sutliffs playing American Idol which sounds even better now in the new and improved Richardson AV room.

Posted by Aaron Smith at 6:56 PM No comments:

Chatty at the Ballgame 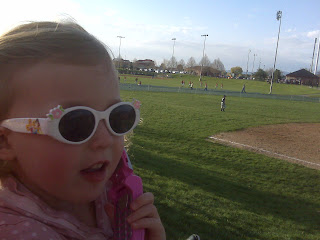 Avyrlie LOVED her birthday party although she is still asking when the HUGE party is going to be ;) She has been wearing her princess. Glasses all day and taking her phone everywhere she goes. Thanks again to everyone (which really was EVERYONE!) for coming and making it an extra special birthday!
Posted by Aaron Smith at 7:18 PM No comments:

Avylie trying to turn me into a toad.

Avyrlie not going to bed. Best part is Aimee growling in the background. Avyrlie is only temporarily stunned.

Finally, why I take back roads when driving with Aimee and don't point a video camera at her too often. She just can't handle the pressure.

Posted by Aaron Smith at 3:22 PM No comments:

I've been working on getting sick and so haven't been in a posting/picturing mood lately. This pic is for Chelsi though as she did request it: 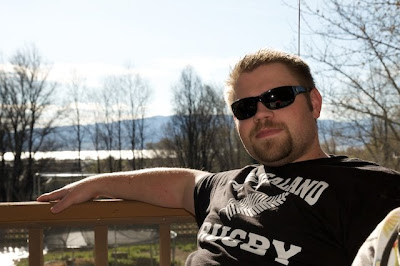 Avyrlie is keen on laziness as well in the mornings. This morning, around 9:30, I asked is she wanted to go to school and play with her friends. She grumbled something like, "No, move your face." Then I asked her why she wouldn't want to go see her friends. She responded, "Because we didn't get our butts up this morning." Not sure where she learned that, but I do know that she gets up with her mother most mornings...

Posted by Aaron Smith at 7:08 PM No comments: 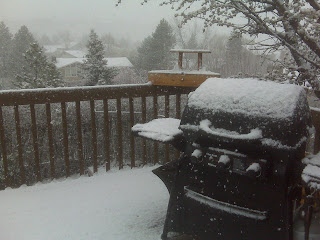 Out my backdoor I see a winter storm. There are also a dozen birds in my cherry tree chirping away noisily. They sound as confused about the weather as I am.
Posted by Aaron Smith at 12:38 PM No comments: 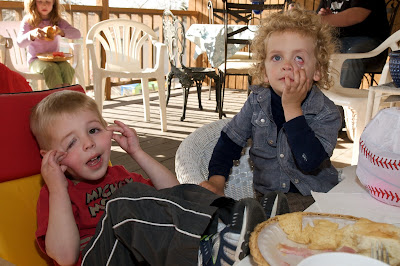 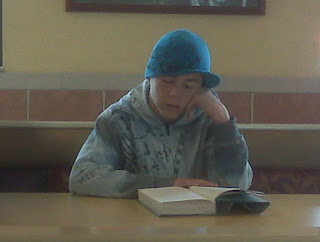 I don't understand the exact logic behind the wearing of both a hoodie sweatshirt as well as an additional hat. In my thinking, the hoodie alleviates the need for additional head apparal, but I'm certain there is some perceived coolness factor that I am missing. I just think it's cute when he accessorises ;)
I certainly have no complaint when he picks to bring along a book rather than PSP...
Posted by Aaron Smith at 1:41 PM No comments:

Out on the town with Avyrlie

Avyrlie and I headed downtown on Trax the other day to pickup Aimee's truck and get new tires on it. Avyrlie and I both love public transportation and walking around town so it was a welcome change of pace for the afternoon.

Avyrlie had plenty of people to chat with on the Trax ride about her toys and birthday plans. She has made some pretty elaborate birthday plans involving every princess imaginable, various animals, several vacations, cakes to feed an army, and nonstop dancing. She almost never mentions anything about gifts (very unlike her present crazed sibling), but she would like her party to be held in a princess castle and everyone to arrive on horseback. When I asked her what we would do with all the horse poop she was quick to offer her brother's cleaning skills for the task.

We missed the 100 south stop (not unusal as Aimee will explain in detail if you ask) and got off at the Temple Square stop. Dylan would have loved the walk past all the construction activity where the old Crossroads was. Avyrlie was much more impressed with the flowers starting to bloom than the cranes and excavation equipment. She's all girl.

After nearly falling in the fountain by the visitor's center (the water was very low and not touching it just isn't an option...) Avyrlie noticed the "princesses" out on the plaza by the reflecting pool and gardens. She was pretty excited and kept asking if they were going to come see her (Disneyland corrution...). It was pretty cold out so I told her that they were hurrying to get their pictures taken so they could get back inside to stay warm. As usual, Avyrlie countered logical reason with princess facts: "No, the nice fairies make them warm because the fairies love the princess because she's beautiful." She waved at all six brides from a distance as we walked through the plaza and was pretty happy just too see them and all the flowers. (as I write this paragraph I am already preparing for Aimee to use against me as reasoning for a Disney trip ;)

We got the truck, dropped it off at Costco and headed across the street to the shopping center on State and 53'rd with B&N, Best Buy and such. Tires were supposed to be done in 2 hours so we had some time to kill. Avyrlie picked Rubios to eat lunch at because she loves the little fish statues and churros. I never complain about anywhere with fish, especially places that don't also serve chicken nuggets. You can see that she takes her churros very seriously. I snapped the pick just after asking her for a bite. She gave me one, but had to do some serious soul searching first. My guess is she finally concluded that by giving me a bite of her churro she would be that much closer to getting all her birthday party demands (she only looks innocent...)

After lunch we read a couple books at Barnes and Noble, and then headed to back to pickup the truck. We were an hour late, but they were still working on putting the spare back on and having trouble with it. Semi-jokingly, I told them to just throw it in the back and I'd have my daughter put it back later. Avyrlie caught the cue and chimed in, "I can put it on! I LOVE to fix the truck!" He told me to head out and around to the garage and they'd meet me with the keys by the time I got there.

I give Avyrlie all the credit because by the time we got to the garage, they had the spare put away and were cleaning the windows and polishing the tires. Nothing worse than an ego bruising from a four year old princess ;)

Hillcrest did much better this weekend, but still needs a little polishing. They are still a bit sloppy and make some silly mistakes. I put together a couple clips.
First is Ian scoring while the lady next to me is screaming "Hit 'em!!!!" Then an interception (not Ian but a sweet play). Next Ian pulling out the moves for a great run and touchdown. Finally Hayden with an Avyrlie takedown.

Posted by Aaron Smith at 5:10 PM No comments:

Family at the Zoo

It seems we don't get to use our zoo passes often enough so when Aaron and Brooke called to let us know they were headed to the zoo, we jumped at the chance. Our passes let us take 2 guests along for free and Hayden is still free as well. Leah also came along because who can say no to an afternoon with monkeys and Aimee?

Posted by Aaron Smith at 9:53 AM No comments:

Hanging Out in the Pool

Hung out downtown at the pool with the family for a night and most of the day. I'll post a couple videos later. It's always fun to play with the waterproof camera :)