Back to school assignment for dad

I had a back to school assignment from one of Ian's teachers to write up some info on him in a million words or less. Click below to read/see what I sent her.

Ian is most at home on the football field, playing a tough opponent, with his family and friends cheering his team on. He plays running back, receiver, and kicker and excels at all three. He transfered from Albion to Union to be in the same school as his football team.

The only thing that has ever kept him off the field was a broken collarbone last year and even then he re-broke it twice during the next week while playing soccer with friends. Only after our third visit to the doctor where I asked them to please put his leg in a cast just to keep him off the field did he finally take it easy enough to let it heal. I think he figured he could still run in the cast, but it wasn't going to fit in his snowboard bindings...

Ian is a hard worker with the right motivation. We have spent a lot of time and effort trying to find the 'right motivation' off the playing field, but on the field it's no mystery: Coach Hinton.
For Ian's first year of football he had the nicest coach on the planet, and they lost every single game. Then he was invited by Coach Hinton to play with a different team in a tournament. Ian came home from the first practice in tears telling us how much Coach Hinton yelled at him and yelled at everybody else. Later that night Coach Hinton called the house to make sure Ian was ok and explain that he was just intense and passionate about helping the kids play to their potential.
For whatever reason, that phone call made a couple things click for Ian. Ever since he has loved being part of a team and has developed a strong sense of commitment. He does a much better job identifying strengths and qualities in others than he does in himself, but is always willing to put in any amount of hard work needed to help his team succeed. He is also very accepting of people without prejudice or expectation almost to a fault. We figure if a burgler were to break in the house while he were home alone, the police would at least have plenty of time to show up while Ian fixes sandwiches and shows off his latest PSP hacks to the would-be-thief ;)

Ian also plays baseball and arena football in the spring and occasionally submits to posing for photos so long as it's sports related...

*** SLEEP ***
With Ian, sleeping is it's own special topic and one that lacks nothing for diversity or depth. Ian is the answer to mine and my wife's parents' prayers when they used to say, "Just wait until you have kids of your own!"

At four months old, Ian stopped sleeping for more than four hours at a time and spent the remainder of his should-be-slumber time screaming about the fact that he was not sleeping. We tried explaining to him that the solution was obvious and simple; just go to sleep! It turns out that with Ian, the solutions have rarely been obvious or simple.

Fast forward to age 8 and the kid now sleeps like a rock for days at a time until you physically pick him up and start moving his limbs around marionette-like in order to jump start him into consciousness. That worked ok until he gained another 50 lbs so now my wife and I play beanbag toss from his doorway in the morning. First one to land a bag inside his gaping, drooling, snoring mouth wins. Also he tends to roll out of bed once he can't breathe...

(sleeping in the entryway)

(sleeping before a game)

He can sleep pretty much anywhere at anytime, but for some reason has a hard time falling asleep at night. I love the that the first question any doctor asks is if he is active enough to burn off excess energy.

Ian has this idea that every activity should fit into every day. He is getting better at fitting homework, reading, and chores into that idea, but they still tend to get bumped out by skateboarding, biking, football, and teasing his sister. Getting his to wind down at the end of the day is next to impossible because he is always ready for the next 20 activities and always frustrated the lack of hours in a day.

We're still working on the sleep thing and haven't found the answer yet though not for lack of trying. If Ian is drooping a bit in class just send him out for a minute to splash water on his face and get his blood pumpin' again. He gets just as frustrated as us with how tired he gets sometimes when activites are more mentally than physically demanding and more individual than team oriented. Teamwork and intensity are his motivators.
('gearing up' for a sleep study)

Food has also become a very important subject for Ian who we lovingly call weed-boy as he tends to grow and grow regardless of the clothing budget restraints we try to place on him. I believe his goal to be 6'4" and naked ;)

(hands off my food!)

He still fights us about the whole shaving thing and would rather we just got a cat despite his entire family being allergic with the exception of dad who is immune to everything except grey hair apparantly. Thankfully he has figured out that using deodorant has made associating with other humans much easier now that they are no longer fainting or fleeing.

Ian (usually ;) loves being with family. Some of his favorite memories and activities are those spent with cousins, uncles, grandparents, and his little sister. Because he is the oldest child of two oldest children, he is many years older than his closest cousin and spent four years as an only grandchild and great-grandchild on both sides of the family. We are still working on unspoiling him after all the captive attention he had.

He is an awesome older brother and is always willing to help with his sister even as she has turned into a four year old monster princess. Her two favorite things in life are telling people what to do, and blaming things on her brother. The kids at her preschool call her 'Little Mother' because she is always supervising playtime, making sure everyone takes turns, and protecting the little girls from the mean boys. She thinks everything her brother does is awesome and wants to be part of it. Ian is very patient with her and all his little cousins who look up to and love spending time with him. 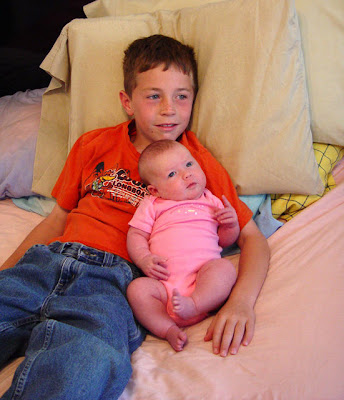 Ian loves to hang out with his dad's cousins who are only a couple years older. They have spent winters snowboarding together and summers at the waterpark. All of them are very athletic and act like peas in a pod.

Although Ian is sadly colorblind, his parents usually let him dress himself. It is both fascinating and entertaining for the whole family, as well as for all who encounter his unique sense of color coordination throughout the day.

Ian traveled with his mother to Australia last year to visit grandparents who were living there temporarily. They were unable to convert him from american football, but he did love the different animals and people he met.

Ian enjoys school most when the rewards are tangible. The science fair proved to be just such an opportunity last year where he learned a lot and did very well, advancing to district and then region.

Ian can solve a Rubik Cube. His dad can not. He loves this.

Every year Ian helps his grandpa pass out drinks for Pepsi at the Eagle Mountain parade. Every year he complains about it until he gets there and remembers how many cute girls are in the parade and watching the parade.

Ian's favorite vacations usually involve animals and family. Seaworld, fishing, crawfish catching in Tahoe, and Disneyland with his cousins are some of his top picks. 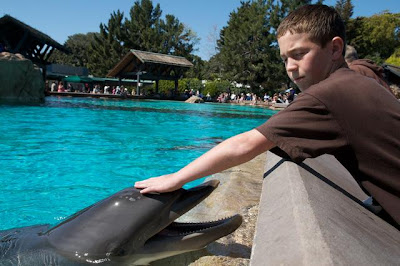 Great Job on your homework Aaron! We sure love you Ian!! :)