Mummy boy in the sleep lab 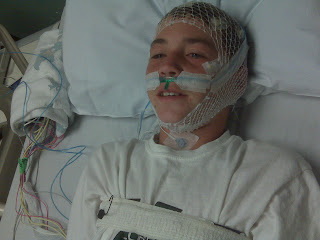 Ian is doing a sleep study tonight @ PCMC. I'm stuck here with him for the night so I'll give 8 hours of sleep a try for the heck of it. Ian is a little nervous but he fell asleep pretty quick after they got him all hooked up and turned out the lights. He sure moves a lot in his sleep and is keeping me awake ;). Much better than a 3 year old on my head though. I'm on a fold out in the same room with him and the room has no windows so it's very private and cozy. The machines are much quieter than Aimee's turbine but still drive me nutty. As long as ian can sleep it's fine...Update - 9/4 (the next morning)

Ian's night was pretty typical. He tossed, turned, and mumbled all night. He also had a short argument with his sister...? I didn't sleep most of the night with all the commotion he made. The techs came in a couple times to check on the equipment and once to reposition the tubing on Ian's nose. This morning they were very nice, but pretty unceremonious about sending us on our way. Just pulled off the electrodes and straps, and tape, and netting, and said goodbye :)

Results will take a couple weeks to be sent to the doctor, but I'm pretty sure I already know what his recommendations will be. "Stop arguing with your sister!"
Posted by Aaron Smith at 10:46 PM

Ian--You look like you should get a starring role in some Mummy show. At least you are ready for Halloween this year with a great costume. Hopefully, the Docs can help you so you sleep better. It makes a great difference when you get a good night's sleep in how you feel. Have a great game tomorrow!
Love,
Grandma