Aimee and I, along with coach Hinton and his wife, hosted the Thursday night tailgate for the football team this week. 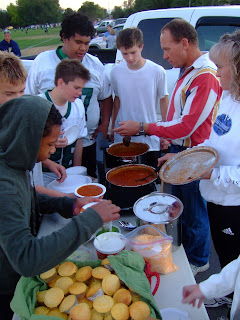 Last week there were a TON of people out for one of the coldest tailgate nights we've had to date. This week has been really warm so we planned on at least the same number of people. Not so much. We were giving away dessert and muffins afterward and ended up taking home and whole tray of brownies and 60 muffins.

Minimal attendance aside, it was a ton of fun and the food was good. Coach Hinton made chili of three-different-levels-of-death chili and brought the chopped jalapenos for true masochists. His wife made peanut butter rice krispie treats with chocolate icing which I am now craving. Not sure why I didn't snag some left-overs... 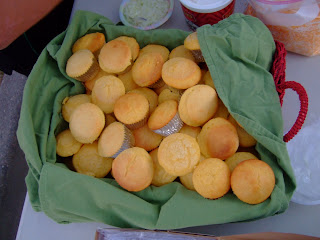 Aimee and I did cornbread muffins and cream cheese iced brownie bites with fruit on top. I'm pretty certain the consumption rate would have been at least triple without the fruit. All the kids thought they looked far too healthy ;) 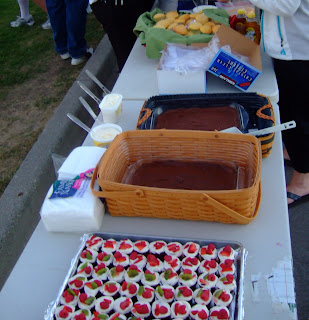 I would eat the fruity brownies! Those look amazing and those cornbread muffins have inspired me to make chili and cornbread this weekend! Even if it is 95 degrees outside.